As I said a few posts back, when I started this handgun journey, there were a couple that I really wanted to own.  Tied for first were the XR9 and the S&W 686+.  For whatever reason, I bought the XR9 first, and last week, I picked up a 4" 686+. 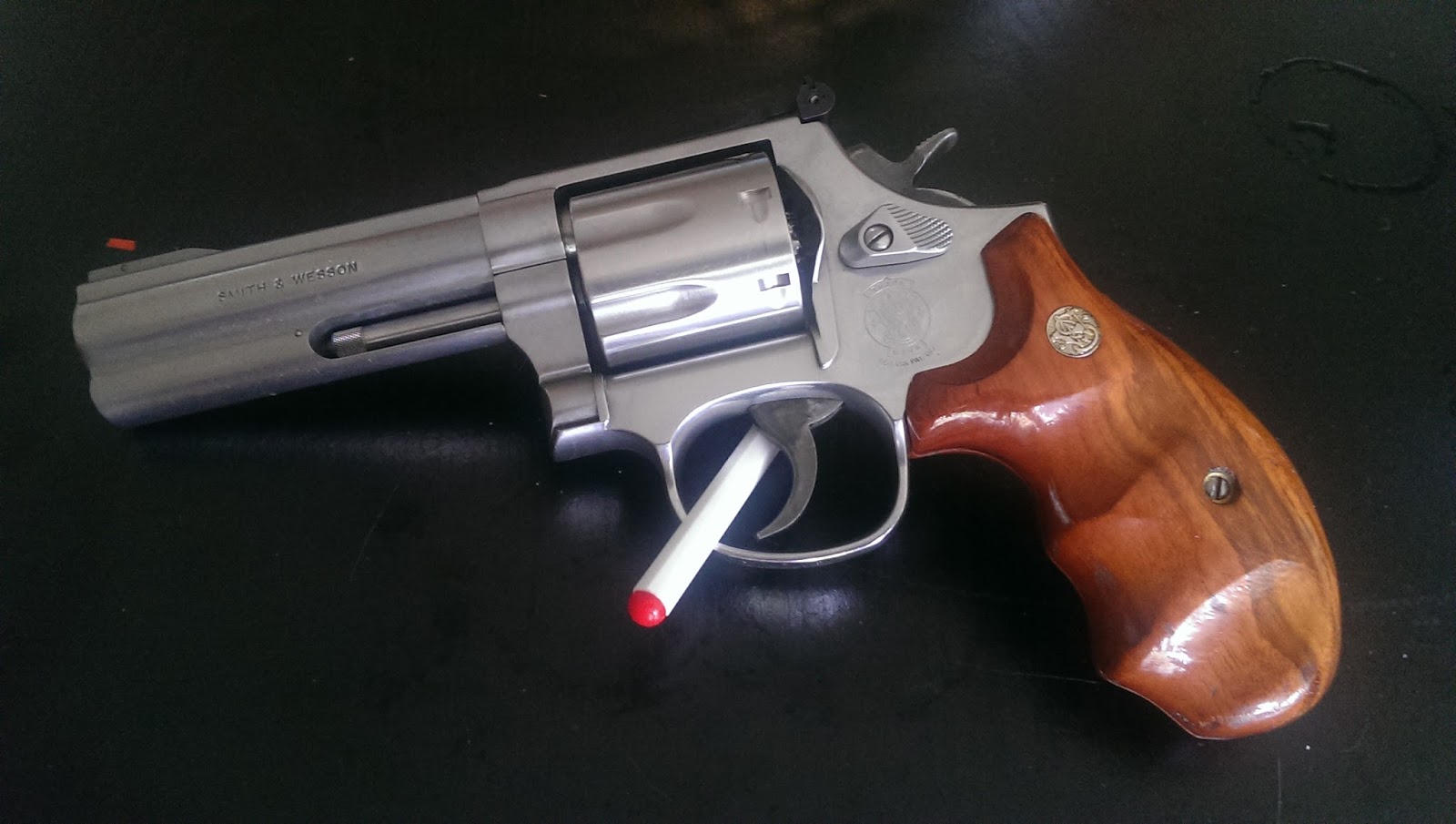 I find this gun to be indescribably aesthetically pleasing.  The 4" 686 is, perhaps, the most beautiful gun ever made. It's iconic, classic, proportional, and clean. The weight and balance is solid and comforting, and seven rounds of .357 magnum is nothing to sneeze at.  Best of all, the action is widely accepted to be among if not the best among revolvers.

I bought a 686-5, which is a 7-round, pre-lock version with some MIM parts.  I don't know enough about forging to have an opinion about the MIM parts. Some people don't like them, but most of what I've read appears to be unsubstantiated opinion.  The lock, on the other hand, is definitely a bad thing.  There are examples of 686 lock failures caught on video, and that's simply something to be avoided at all cost.  The -5 is the last version they made without a lock.  -4 is the last version without MIM parts, which would have been preferable (even without solid evidence of MIM inferiority), but the -4's are rarer than hen's teeth.

The gun is gorgeous, and while the grips are pretty, they are downright uncomfortable for my hands.  My hands aren't particularly huge; I wear size large gloves, but can fit into mediums in an uncomfortable pinch. However, my middle knuckle is bruising against the trigger guard -- and I haven't even shot the gun yet.  I'm not going to fire it before replacing those grips lest I break a knuckle.  I'm going with rubber Hogue grips, which I've held and appreciated, and which look like this:

Notice that the middle finger is placed well below the guard.  Maybe my wood grips would be fine for a person with small hands.  Such a shame, because they're pretty grips.  I'm choosing rubber because .357 has plenty of kick, and I'm willing to sacrifice a smidgen of style for significantly increased comfort. I like the look of the Hogues just fine, anyway.

The gun was filthy when it came to me.  I've hit it with gun scrubber, Break-Free CLP, and a bronze brush, and it still has carbon on it.  The person who owned it before me was a pig.  I suspect there's rust up under the trigger plate, or something. I'll take the grips off this weekend and give it a proper soaking.  I'm inclined to forgive the shop that sold it to me; they were prompt with shipping, and the gun came with a lovely, if older and a bit worn, leather Bianchi case.  This case is apparently no longer sold, and I plan to take it to my shoe shop and see what they can do to restore the leather.

Regardless of the maintenance the revolver needs, the trigger is a joy, and my FFL is certain that it has after-market springs that make it even smoother than the legendarily smooth 686 trigger pull.  I can't wait to take it to the range.
comments powered by Disqus